A dumb but nice thing I did

Here’s what I like about having a 3D printer in the basement. Tonight the 9-year-old had a friend over, and we all got some pizza, and on the pizza were a couple of those little legged-spacer things that keep the cardboard box top from sinking down into the cheese and sauce. Both 9-year-olds thought they were cool and took them to play with, and the 6-year-old was miserable.

So while the kids were upstairs watching Chicken Run and eating popcorn, I nipped down to the basement and fired up the Cupcake with a quick sketch from Openscad. Half an hour of printing time later, there was another pizza topper. I told the 6-year-old to be gentle with it, because it was the only one in the world. 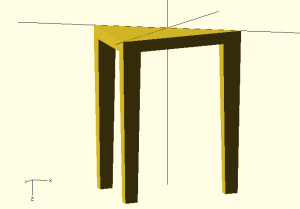 Like Loading...
This entry was posted in making, toys and tagged 3D printing, pizza, useless. Bookmark the permalink.