(Update: Mostly fixed. If reflashing a Printrboard from the bootloader on up interests you, see the next post.)

I was getting ready to print a nice big dragon on my Printrbot, but I knew it was going to take several hours, so I also got ready to port a lidar project I’ve been working on from Arduino to Teensy (same development environment, much smaller board, a few different pins).

I wired things up, opened the test program for the lidar (which just sends the measured distance to the serial monitor) and prepared to compile and send. ACM1 or ACM0? I picked ACM0 and hit the upload button, got a “Reboot OK” message. Then opened the serial monitor and read a line that started with “Marlin” and ended with a couple of extruder temperatures. I would have thought that Repetier having the port open to read data and write command would stop another program from jumping in, but nope.

Oops. It got worse. Neither Repetier nor Cura could connect to the printer any more, even after several power cycles. So I went upstairs to deal with some other things for a few minutes, and when I came back there was a decidedly acrid smell in the air. Whatever I uploaded to the printer had cranked the heat on the #2 extruder up to maximum and left it there. Globs of black plastic, hot end hanging in midair, all that fun stuff. I figure maybe I can salvage the nozzle.

It’s not clear whether I can salvage the main board, though. Whatever code it was or wasn’t running appears to have bricked the processor: it doesn’t appear as a USB device anymore, the Atmel Flip program for burning new code doesn’t seem to work, neither does the open-source alternative, dfu-programmer. (Which makes a little sense, considering that whatever code may have made it up there was for a substantially different CPU with  a quarter the memory and different pinouts.) Tomorrow I’m going to try and reflash using the old-school six-pin ICSP header. 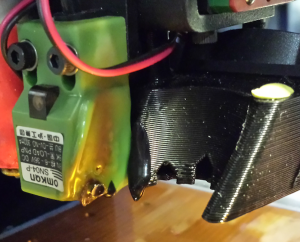 After that, we’ll see how much of the rest of the machine is salvageable. The fan shroud on that side is only a little melted, same with the inductive Z sensor.

Oh, and at least I don’t have to ponder whether to get a regular hot-end to replace the toasted one or to wait until the all-metal version comes through — now they’re both on backorder.

Like Loading...
This entry was posted in things that don't work and tagged 3D printing, arduino, disasters, gadgets. Bookmark the permalink.