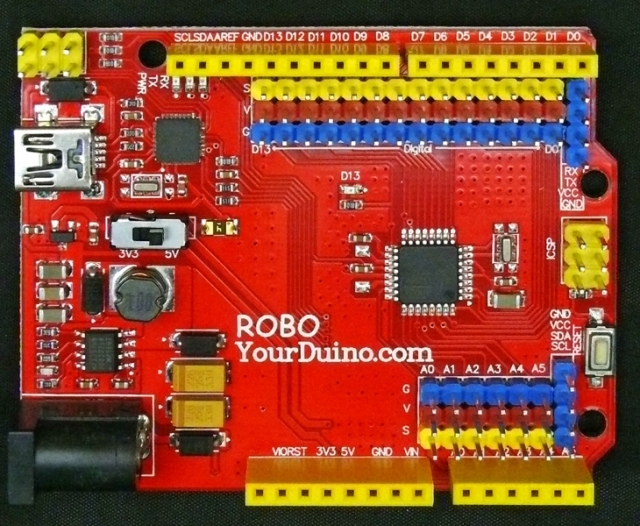 I really like the idea of Yourduino’s RoboRed: gobs of 3-pin headers for almost all the arduino I/O pins, with n-tuplicated power and ground connections. Heavy-duty regulators built in for two amps of 5V and half an amp of 3V3 so you can run peripherals and servos and little motors oh my without a bunch of auxiliary power supplies.

I’ve been struggling to make the thing work with my new (used) laptop: just a simple sketch with a servo bipping back and forth (heaven forfend an ultrasonic sensor to give the servo a signal to track) stutters and stalls and sorta kinda works a little some of the time. Half the time the upload fails when there’s stuff attached. Was it my new laptop’s underpowered USB ports? Something hinky about USB3 under Ubuntu? Some completely implausible persistent side effect of trying to use Ardublock?

Nope. I got a sketch to upload and attached the board to a powered hub. To a USB battery back capable of delivering 3 amps. It kept stuttering, and the status LEDs kept dimming every time the servo tried to do its thing.

Aha. Somewhere on the floor amid the old pile of cables I found a half-pound wall wart with the right size plug to fit the RoboRed’s independent-power input. Zam! So it seems somehow that although it can deliver 2 amps to peripherals under the right circumstances, this board when running from a USB port has even less current available than a regular Arduino Uno. Perhaps  it’s the vagaries of the new power circuit, perhaps it’s just the fact that it doesn’t have those two big honking cylindrical capacitors  holding up the power rails under sudden current draw. Doesn’t really matter.

The question is, what to do? The whole point of the new used laptop was to be able to set up quickly to show people cute toys, even when there might not be a spare outlet handy. Down to the basement to find a nice multicell LiPo battery and a spare power plug and then maybe fab a case/bumper for it. I guess I was going to need this sooner or later…

Like Loading...
This entry was posted in things that don't work and tagged arduino, robots. Bookmark the permalink.

2 Responses to Belt and suspenders