Who needs a laser cutter?

Posted on February 5, 2016 by paulwallich 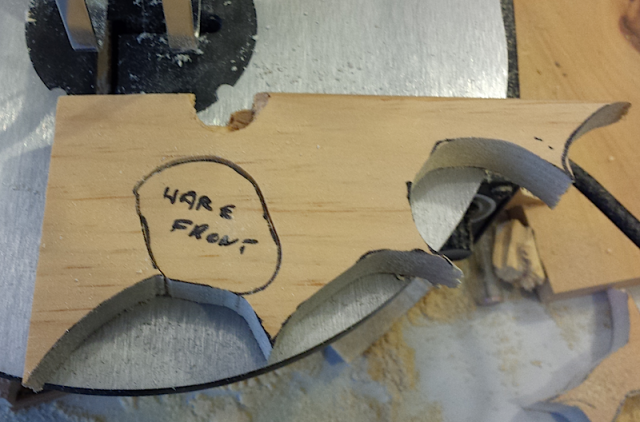 Well, I do. Or at least I want one. But cutting out a bunch of parts on a scroll saw in the past few days has given me new appreciation of what can be done with simple tools. The kerf is not much bigger than a laser’s (plus, no soot stains).

I found myself comparing the workflow for this project if I’d had a laser cutter handy versus what I’m actually doing.

I’m making stamp pads for an animal-track unit at the 7-year-old’s school: wood blocks with craft-foam outlines (lifesize) of the tracks of various local creatures. I glued one set of tracks onto a piece of wood, cut out the blocks, then traced around those to make another three sets. Next: apply craft foam to the blocks, stick paper track templates to the foam, cut away everything that’s not track. A few hours work, most of it pretty mindless, the kind of thing you can do watching tv with the kids.

If I had a handy laser cutter, a lot would depend on whether I could get the track images in digital form or had a Glowforge with its magic camera. Otherwise, careful scanning or photography, followed by careful printing to make sure the sizes were right and there was no perspective skew. From there it would be pretty simple: Cut the wood (three times, to make up for only being able to cut 1/4-inch stock) and engrave the track marks on the top panel for a guide. Then cut the craft foam with the same file and stick all the little bits on, using the engraving as a guide. Finish gluing up the blocks. Not entirely sure which would be simpler; most of the work that’s eliminated by the laser is busywork, which could be either good or bad.

But I’m beginning to think about some kind of hybrid workflow for woodworking projects, where the laser does marking, engraving and maybe shallow cuts, followed by real blades. If I had a laser head mounted on something like a 4×8 Crawlbot I could mark everything for even the largest project in a single pass and then cut with a conventional blade.