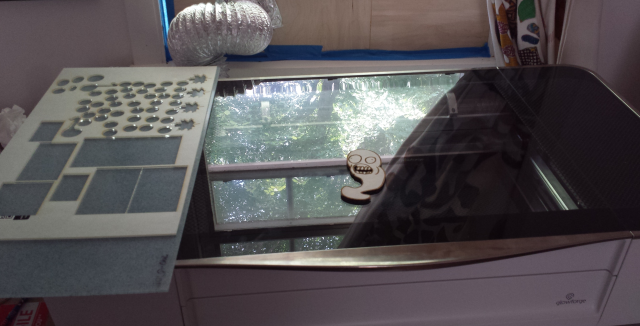 My laser cutter arrived a few weeks ago. It’s pretty cool. Partly because I’ve been anticipating it for the better (worse?) part of two years, but mostly because it’s just there.

I’ve used a laser cutter before, and this was the workflow:

It wasn’t that much fun, and it was not conducive to experimentation. If I screwed something up, it would usually be weeks before I could come back.

If I screw up, I figure out how and redesign or just run the job again with new settings. And since I can use it often, I don’t forget how to work the software or the hardware between times. The 12-year-old has used it to make chachkes for his chess club; one of his friends came over and drew some monsters to cut out of cardboard. It’s easy.

My main complaint is that I am not worthy. Having it doesn’t endow me with new artistic or engineering skill, or even a working knowledge of multiple CAD programs. So that part is going to be a slog, but at least the incentive is there.

Oh, and another complaint: it only cuts through things like acrylic and wood, a maximum of about a quarter inch thick.  No aluminum or steel or granite. (But it does have some really cool low-power capability — when I was playing with a design for a bookmark, I engraved my tests on a piece of 20# copier paper without even leaving a mark on the back.)

Like Loading...
This entry was posted in making, possibly useful, toys and tagged glowforge. Bookmark the permalink.