Scanning electron microscopes are really heavy.  I know this because our local high school just sent theirs to the scrapyard,  and I got to spend the morning scavenging all the bits I could take off  with a screwdriver, and a set of allen wrenches. The electron gun, for example, is about the size of a softball and very nearly solid metal.

“Wait,” you say, “Your local high school had an SEM and they scrapped it?!?” Well, sorta. Some researchers at the big IBM facility an hour down the road had an SEM back in the early 90s, and when they’d used it for about 10 years and needed a better one, instead of scrapping it they put it in a truck and brought it to the high school, where they explained to the facilities people about chilled-water supplies and 100-volt electrical feeds and the care and feeding of diffusion pumps. And some of the researchers even helped advise on how to to fix it when it broke. And broke again… (And when the school board is arguing over the cost of a third of a music teacher, “We need to upgrade our SEM” is not that high on the list of budget priorities.)

So when the school needed space for a computer lab, the SEM was up for grabs. The high school physics teacher (who is also a makerspace person) called me in, because the vacuum system was pretty similar to the ones I worked with in college. All it needed, according to the experts, was a new diffusion pump and a new high-voltage power supply and maybe some new electronics. But most of all it needed to get out of the hallway where it was in the way of the fire exit.

Which is where we get back to heavy. Not amateurs with a pickup truck heavy. Professionals with lifting tackle and reinforced suspensions heavy. Too heavy to just drive to someone’s garage and let it sit there while we figured out whether fixing it was worthwhile. Too heavy to devote all your spare project time to for the indefinite future. (A quick look at ebay suggests that you could probably find the parts for under a grand, plus the cost of custom machining and the labor of some poor sap cleaning out the inside of the entire compromised vacuum system with acetone and nitric acid. And the time to diagnose and repair the old logic boards and splice all the wires that got cut to move the thing into the hallway. For that you could build a whole new atomic force microscope.)

Well, at least it had another good decade.

You learn a lot from taking things apart. Old-school circuit boards with lots of socketed components and plugs and wires connecting the boards. The main vacuum chamber that must have been machined out of a solid piece of metal the size of a scuba tank. All the ports for optional widgets, each sealed with a perfectly-machined blank. Held together with more socket-head screws than I could count, ranging from the little 3mm jobs that are the small change of maker builds everywhere to monsters that would have been at home on a carnival ride or and oil rig. Micrometer screws all over the place. 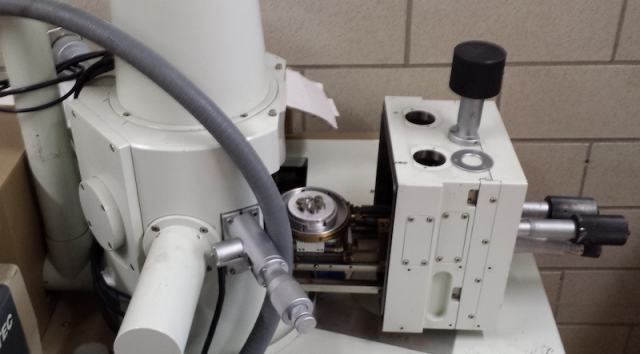 I got much further than I’d thought — at first, all I really wanted was the sliding — and twisting, turning, and raising and lowering — specimen stage (see above). But things just kept coming off. I must have lightened the scrap load by three or four hundred pounds. For only one item did I need a hand: a burly experimental physics student helped me wrestle the rotary vacuum pump off its hanging-spring suspension, out the exit door and into the back of my little car.

Now, of course, I have no idea of what to do with most of it. Anyone need a just-barely-portable rotary vac pump for a project? Or a bunch of probably-functional LSI chips?

Like Loading...
This entry was posted in possibly useful and tagged Moore's Law, parts. Bookmark the permalink.